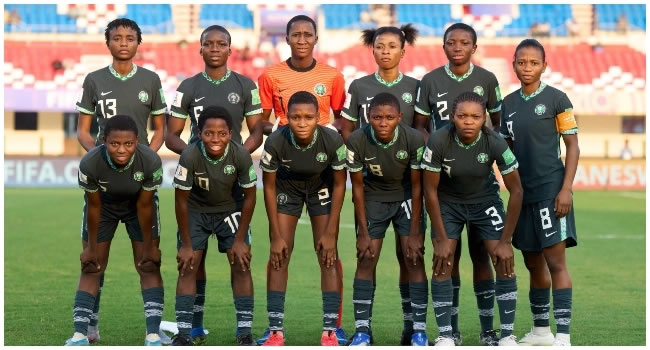 Nigeria reached the FIFA Under-17 Women’s World Cup semi-finals for the first time on Friday when the Flamingos beat the U.S. in the quarter-finals of the 2022 competition.

The Flamingos kept their nerves to defeat the U.S. 4-3 on penalty kicks after a 1-1 draw in a pulsating quarter-final match in Navi Mumbai on Friday.

It had been tagged a battle of David against Goliath and the Americans kept up the pressure by seeking an early goal.

This was after the game eventually started following a long delay due to adverse weather conditions.

But Africa’s best team defended stoutly and showed no signs they could easily be brow-beaten.

The game flowed back and forth and Nigeria would go into the lead in the 27th minute when the Video Assistant Referee (VAR) adjudged that Aminat Bello had been fouled during a Nigeria onslaught.

Right-back Omamuzo Edafe scored from the penalty kick spot for a 1-0 scoreline.

The Americans, seeking a place in the last four for the first time in 14 years, were back on level terms 13 minutes later.

That was after an unlucky Comfort Folorunsho diverted a fierce shot at the edge of the goal area past goalkeeper Faith Omilana.

Both teams fought gamely in a battling second half, and the Americans were denied by Nigeria’s stout defending once more when Miracle Usani heaved the ball away.

This was after Omilana had been drawn out by Gamero Onyeka with six minutes left.

The game went straight into a penalty kicks shootout after regulation time, with Edidiong Etim, Immaculata Offiong, Usani and Edafe scoring for Nigeria while defender Comfort Folorunsho missed her kick.

Her miss did not matter though, as Emri sent her kick wide and substitute goalkeeper Linda Jiwuaku saved from Bhuta to give Nigeria the day.

Victory somewhat recreated the events of July 25 2010 in Augsburg, Germany when the Nigerian under-20 girls defeated their U.S. counterparts 4-2 in a penalty kicks shootout.

This was after a 1-1 draw in a FIFA Under-20 Women’s World Cup quarter-final match.

The News Agency of Nigeria (NAN) reports that the Flamingos will now take on the winners of the encounter between Colombia and Tanzania in the semi-finals.